I smell sunshine in my skin. Sunshine and....oranges? Did I eat oranges today? No, I didn't. So why is my dried sweat so citrusy? Have I been secretly injected with flavonoids? My aunt Joan would hate that I just said sweat. She always said that horses sweated, men perspired, and ladies glowed. Clearly my aunt Joan has never seen me in aerobics class. I could equal any horse after he's pulled a plow through 87 acres of barley just trying to get my chubby rear into one of those up-the-butt-leotard thingies. Yeesh.

Anyways. I can't possibly have already forgotten where I was going with this, can I?

Today I walked and walked. There are 9 fruit and vegetable stands within 5 minutes in either direction of my house, 14 pizza places (2 of the same chain even!) and no fewer than 17 bars. My kind of place, if only I had the money to stop and have a sit. Walking is probably my favouritest pastime, which comes in handy lately because it's cheap and plentiful. But sitting on patios on warm days sipping daiquiris from a frosted glass with a plastic sword piercing a cherry or two floating around the top...oh man, that's a pretty close second. And while booze also seems to be plentiful around here, it doesn't come cheap (at least not the dirt cheap that my pocketbook insists on). But I do wonder how long I can really stay dry - I'm sure the seizures and hallucinations can't be far behind. So while patio-hopping might be out of the question, at some point I'm going to have to decide that a family-sized bottle of vodka is not "frivolous" but actually a "wise investment". And what better way to relate to my new neighbours than to sit on my veranda drinking from a paper bag?

I live in a part of town affectionately called the "international market", which basically means that when I met my new roommate, she said "Well, every neighbourhood needs a white girl!" and I'm it. Quota filled, all others need not apply.

But like I was saying, I've been doing a lot of walking. Today, for example, I walked south until I finally realized I was really going north. I was so embarrassed I blushed. But I am marking my territory (not literally...in fact, all the walking has left me quite dehydrated). Believe me, if I thought a little trail of multi-grain cheerios would still be there tomorrow, I'd be sprinkling just as fervently as the crazy lady with the grass seed on her little patch of concrete. It takes me 5 songs to get to the subway station. I can (almost) literally spit on the nearest pizza place - but since it has free delivery I can already envision making them walk. I can get to 24 hour bus stop before I even have time to fish the change out of my wallet. So. The neighbourhood is no longer foreign.

I covered so much ground that I was limping when I got home, and I had to unstick my sock (on which monkeys are inexplicably surfing) from the already-coagulating scab of a new blister. Now, I apologize for this in advance, but I just had to take a picture of it (aside: it's surprisingly hard to take a picture of the back of your own foot) (also: I guess I don't need to call it an aside if it's in parentheses, right?) 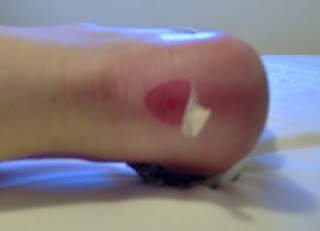 If you look very closely, you'll see a baby blister forming in the centre of the mommy blister. I thought that was pretty neat. Sore feet are pretty much par for the course for me, so I hobble along despite it, and resolve to soak my shoes in cold water when I get home so the blood doesn't set.

Plus, who can stop walking when they're on a mission? To be fair, this mission of mine has been in active duty for the past 12 months. As you may know , Toronto has a less than stellar reputation with the rest of the country, and "unfriendliness" is high on the list of complaints. So, having a lovely smile if I do say so myself (and I do) and a willingness to try anything once (or, for 12 months, as the case may be) I decided to put the theory to the test. So when I walk about, I smile at everyone I meet. Everyone. I call it my "Smile, Toronto" project. Today's results:

Remarkable, right?But I feel compelled to congratulate the woman who was waiting for a bus on Dufferin who smiled back. I was the crazy girl who seemed to be stumbling a bit, but was actually just walking-hyphen-dancing - my hair is the shade of soft butter, and I was wearing green pants and...some sort of top. I'm sure I was wearing a shirt. What shirt?

Oh yes, the white one. The dreaded white shirt. You see, I have this white lacy blouse that looked good enough to wear on the hanger in the store when I was high on credit and fluorescent lighting. But when I got it home I discovered that the fit model must have been a cousin of Sponge Bob's (Sponge Roberta?) - it was just that boxy. Horrid, really, not flattering at all, but the thing is, I wear. I wear it a lot. I wear it a lot because I hate it so much. I feel bad for the shirt and sense that it knows it's unloved, so I keep it high rotation to make up for my lack of affection. That sounds a little crazy, but think about it: if you were a shirt, wouldn't you at least want to be worn, if not loved?

Anyway, by the time I got home the neighbourhood was thick with the smells of barbecue. But it wasn't even the mouth-watering thought of a big juicy steak that had me in throes of passion - it was the promise of the baked potato as accompaniment. The baked potato probably does not get all the recognition it deserves, being so often paired with impressive main courses (it's the Jan to steak's Marcia). But here's my dark secret: yes, I like a baked potato, swimming in some butter and chives...my body seems to be craving carbs right now. But in all honesty, baked potatoes are merely the altar at which I worship the god of sour cream. Oooh, my hips just gained an inch thinking about it.

All right, I've bared my soul - now leave me to my neosporin and starchy thoughts.
Posted by Jay at 3:11 pm

Email ThisBlogThis!Share to TwitterShare to FacebookShare to Pinterest
Labels: Adventurism, Life is Good