This weekend really ended well for having started out with sobbing. Big, fat, uncontrollable sobbing.


Friday was the anniversary of Rory's death. This is not the kind of anniversary you celebrate, just...mark. And to mark it, because I had to, because it has certainly marked me, I wanted to visit her grave. In theory.


In reality, to visit her grave, I'd have to also drive by the place on the road where she died. Where her blood soaked into the ground and now fertilizes weeds. Where she spent her last conscious moments.


At home I have gotten to the good place where I remember the good times, and smile about them. I can look at photos without dissolving into tears. At the cemetery I can think of her "resting peacefully", or elegantly disintegrating back into the earth, dust to dust. That's nice.

But driving by that spot, THAT SPOT, with the underwhelming marker that doesn't convey one ounce of her preciousness, the corpses of flowers dead almost as long as she...I come undone. Rory's legal death happened almost 48 hours after her accident, in a hospital bed, surrounded by unbelieving relatives, and me. But her life ended on the pavement. And that spot makes me dwell on those last moments, whether the last thing she saw was the road as it rushed toward her, panic filling her lungs, and then terror, and then dark. Or did she lie there feeling the life rush out of her, regretting, already missing her daughter, feeling the pain of crushed bones and organs and dreams?

Instead, I was kind to myself. I took a rare night off work. I drank in sunshine and good conversation, and yes, daiquiris. Mango daiquiris! Banana-strawberry daiquiris! Between those and the gellato (lychee and cantaloupe), I've had enough servings of fruit for the week!

We walked for miles and miles, sweaty hand in sweaty hand, just to see what we could see. The flats I wore gave me 9 blisters (my feet were made for heels) and really earned the humongous steaks we ordered for dinner, along with a sharing platter that held the most beautiful black olive tapenade and smoked salmon that could turn a doubter into a believer.

We went to the drive-in, passing by the house that Rory last called her home, and I felt fine. Finer than fine. I was good.

We a saw a truly terrible movie (The Expendables), followed by a pretty forgettable one (The Switch). And we didn't mind because we sat together in the back seat and acted like obnoxious 10th graders. It was divine.


We slept sumptuously, our concave little bodies cradling each other, and woke up smiling. Maybe we knew that good news was on its way: my sister is engaged. Yes, another one. That's 3 out of 4 sisters, in case you're keeping tally. My mother wants to throw up (from happiness, I'm sure. I know I've thrown up from happiness many times before. Of course, as far as I'm concerned, "happiness" and "champagne" are interchangeable.)

And now I'm back at work, a 13 hour shift, the first of 12. It sounds a bit brutal, but I am recharged. And, in the likely event that my batteries don't last the entire stretch of work, I've also got my eye on the next great weekend:

I'm booking a weekend at a thrillingly expensive couples-only resort (and trying not to work out in my mind the number of hours I'll have to work to pay for it), treating myself and my honey to a private spa villa that has a fireside jacuzzi, a sauna, a calming 4-headed rain forest walk-in shower, a bed big enough for our imaginations, 5-star room service, a masseuse who will come to the room, and enough space to grow my heart and be at peace. Really, really at peace.
Posted by Jay at 12:07 am 22 comments: 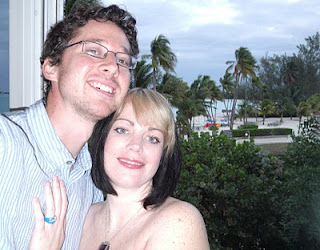 Wow, it's been a while.
Here we are in the Bahamas, and yes, we did come back.
We came back engaged!
(That ring on my finger, though beloved, was replaced by a diamond that was waiting for me when we got back).
He got down on one knee on the beach, at midnight, on our 6 month anniversary.
It was perfect. 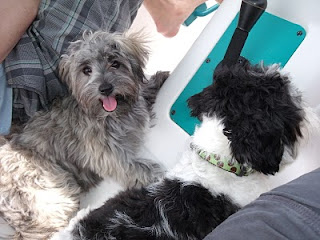 We have 2 pups: Herbie is amazing, as always, and Gertie is his constant companion. They love the dog park, the cottage, bacon, and each other.

I got divorced!
Sean, conveniently, is a lawyer, and infinitely patient.

So now we're planning a wedding (for February) but not before my little sister plans hers first!
Perhaps not surprisingly, it's her wedding that has me all emotional.
Suddenly, she is a woman, in love, beautiful, and ready to start a family.
I feel old.
But also blessed, and excited. 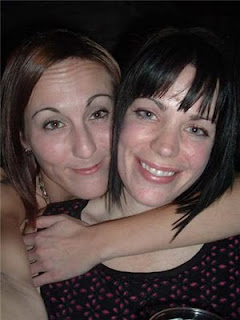 I will miss her always.
I remember her laugh, her fingernails, the way she pulled on a beer, the dizzying feeling of embarking on an adventure together.
I remember the day she got engaged and barely took the time to say yes before she called me up and demanded my services as maid of honour.
The wedding never happened, but now, planning mine, I feel her loss keenly.
I bought my wedding dress by myself because I knew that anyone else's presence would just highlight Rory's absence.
I know that she would be happy for me, and I know that I am absurdly happy for myself, and I know that happiness multiplies, and I feel that, every day.
Posted by Jay at 4:07 pm 24 comments: