It's been a shade under a year, but if you saw the scars that fleck my left side, you might think I've had them forever.
I haven't.
I've had them ever since I was unlucky enough to be t-boned on the driver's side on a dark and rainy night but lucky enough to live. Arriving on the accident scene too late to see me, the state of my blood-splattered car had Sean seriously doubting that I had.

I had left work early, but not very early, probably just a half hour or so, because I'd had a headache. Had I toughed it out at work, I would have missed my own brush with death. Sean was already in bed because he had an early meeting the next day. It was early June, and if it hadn't been raining, I might have had the top down on my Beetle convertible. But it was raining, so top was up, as were my windows, and the air conditioning was on.

It was elevenish at night and I was about halfway home when some jerk in a cube van sped through a red light and hit me, hard. He was so big and quick that my little car didn't stand a chance - I got shoved right through the intersection for several meters and ended up jumping a curb and finally released from the van's front grille, my car (I called her Emma) landed on a traffic island.

When I came to, I couldn't fathom where I was. I knew I was in my car, and there'd been an accident. I felt pain in a vague and persistent way. There was smoke, and a smell. Acrid. I spit glass and blood out of my mouth but the taste and the grit remained. I saw long grass on either side of me and had no idea where I was, and couldn't work out how I'd gotten there. I saw the tail lights of the van who'd hit me drive away.

When I came to the second time, my instinct was to get the hell out. I unbuckled, felt around blindly for my purse, and tried unsuccessfully to open my door. I realized dimly that my window was completely missing, and even that some of the missing pieces were now sticking out jaggedly from my arm. I tried to reach to open the door from the outside but my body responded with shooting pain enough to paralyze me.  A man with an umbrella, who as far as I was concerned had just appeared out of nowhere, told me not to move.  Another man was on his cell phone, talking to a 911 operator. A third man was telling me he was a first responder, and asking if he could help.

I felt an almost overwhelming sense of embarrassment over all the attention, and if I had been even remotely ambulatory, I might have just called a cab and disappeared. I remember wishing someone could just call my husband, and let him take care of everything. Instead they called an ambulance, and the cops, and the fire department, who arrived in that order.

A medic climbed over my gym bag in the passenger seat to put a neck brace on me and ask me questions about which body parts hurt the most: head, back, neck, chest, knee. As I named them and concentrated on them, I grew enormously worried. My heart felt like a huge weight was sitting on it and I found it hard to breathe. She found it hard to believe that I had neglected to mention my arm, which was hosting half a window but losing a lot of blood. And it did hurt, hurt quite a lot actually, but I could see why it hurt, so it didn't concern me a whole lot. It made sense. My heart worried me considerably more.

The medic reassured me that the smell was just from the airbag deploying.

I had registered the limp balloon spread over my lap but had no recollection of it inflating. Supposedly it was the airbag's punch to my face that made me lose consciousness in the first place. It also gave me a bloody nose and a black eye, but I have no memory of it hitting me whatsoever.

The medic held me upright and did what she could to stop various parts of me from bleeding so profusely while the firefighters got to work cutting me out of my car. The noise was jarring (and made me remember that I'd left work with a headache 30 minutes and a lifetime ago). Finally they pulled me out of the wreck and onto a backboard. The paramedics cut the clothes off me as the ambulance rushed me to the hospital, and the universe unmercifully kept me completely conscious for this humiliation, though barely.

I still have those clothes, somewhere. For insurance purposes, they told me, though the crappy no-fault insurance in Quebec has paid for little, and so far not for the ruined clothes that they themselves sent me the claim forms for.

The emergency room was a rush and a blur and the only thing I could think of was that I had not been in that hospital since I had watched Rory die in it nearly three years previous. A nurse very gently and carefully removed a necklace I was wearing. I went for several rounds of xrays and tests. The doctors scratched my face up something awful because I was covered head to toe in glass fragments, some the consistency of dust, and it got on their gloves, so they hurt me with every touch. They fed me info, in french and broken english, and I apparently responded back in french and broken english but retained nothing. I wanted to cry but wouldn't.

Pinned to the backboard, I was helpless and scared. My heart ached, literally.

Sean had arrived to the accident scene to see my crumpled car cut wide open, and was directed to the hospital where he was now waiting in a little room with some folks who were waiting for a loved one to die. He was not comforted by this.

When they finally let him in between procedures, I was not looking my best what with the shards of glass still hanging out of me and the blood soaked hair and the lack of clothes or dignity, but his relief and determination above all to appear cheery were palpable. I had to ask him to step back as he had put his face so close to mine that I couldn't even focus on it.

Someone came to whisk me away for yet another round of xrays and asked Sean along to help keep me on my side while they checked out the bruising and swelling of my heart. They pulled and pushed my gurney all over the hospital until nausea overcame me and the nurses had to flip the backboard on its side so I could vomit into a kidney shaped bowl without choking to death. I apologized through heaves but it didn't make me feel any better.

The whole ordeal is pretty hazy, except for the part where they vigorously cleaned out my wounds. That was abrasive, shocking, and worlds beyond painful. Some of the gashes were really deep but don't you worry because they have special tools for sticking in there and retrieving all matter of detritus. It was hell. Police attempted to get a statement from me somewhere in there, while I was still in the "emergency" part of my care where I was rambling quite a bit but not quite what you would call coherent.

I don't remember much. My memory is full of holes, not just of the accident, but of the few days after it. Concussion will do that to you.

I do remember the trip to the car graveyard to retrieve my things several days later. My car was flecked with blood, in strange and faraway places. A box of wedding invitations that I'd been working on had spilled its contents all over the place, and I later found myself scrambling with my one arm to remake them in a hurry. A hat that I'd completely forgotten I'd been wearing was crumpled and bloodied under the dash. It was the first and only time I'd worn it. I said goodbye to the corpse of my car, sad that Emma was gone just 11 months after I'd bought her, and grateful that she'd saved my life. I should have died in that crash, the cops and firefighters told me that incredulously, but those little Beetles are a hell of a lot sturdier than they look, and she allowed me to live.

I was sore, deeply sore, for days or weeks afterward, and covered in the kind of deep bruises that only things intended to save your life can inflict. I had dental surgery to recover my broken smile in time for my mother's wedding just 3 weeks later, and did enough physio to dance at my sister's wedding 6 weeks after that. It was rough, and in some ways it still is.

I still have pain, of course. I may not fully recover but I am well enough to live my life, and there's a huge amount of wonder and gratitude at that.
I still have glass underneath my skin. Once in a while something will sparkle, and it'll be a tiny fragment working its way out.
My insurance tells me my scars are worth cash but so far I haven't cashed them in. It seems kind of degrading to have them assessed for a dollar value.

Sean replaced my car for me. I had bought Emma because she was to be the last of her kind. I could not imagine driving anything else, so Sean scoured the country and found me Ruby, my third Beetle, and she was there waiting for me when I finally got up the courage to get back behind the wheel.

Like I said, it's been almost a year. I'm still not over it. Perhaps the most lasting effect has been my fear. Sean drove me around for the first bit, and though he would have been willing to rearrange his whole life in order to do it permanently, I knew that wasn't really a good option. For the first month or so, I would drive to work a complete mess and then vomit in the parking lot. But as a therapist, I knew that I couldn't allow the fear to overcome me, so I persisted, and though I still get nervous if a car gets too close or if there are less than optimal conditions, I get to where I'm going, even if I avoid that certain intersection at night and continue to harbour anger toward cube vans.

Life is full of little miracles, and the fact that I am here to tell you that is one of them.
I am lucky. Absurdly lucky in so many ways. 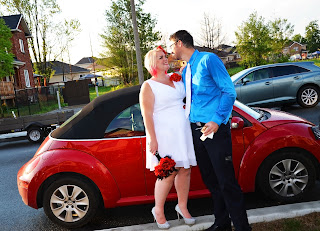 (Yes, Ruby is wearing eyelashes, thank you for noticing!)