It was a hot and steamy shower. The body wash smelled of kumquat and kiwi; the shampoo was lathered on thick. The showerhead was on a favourite setting, massage, but friskiness between the two bathers was kept to a minimum because the two lovers thought they had all the time in the world.

But they were wrong.

Little did they know that a strange but lethal weapon had been lurking in the dim corners of the shower stall the entire time, just waiting for the perfect opportunity for total and utter destruction.

"Where are you bleeding from this time?" asked the taller one, unsurprised.

"Fuck! I just shaved off my finger!" yelled Jay, offering up the bloody stump where her hand used to be as evidence.

The sight of so much blood surprises Jason, surprises him so much in fact that instead of feigning concern, he says "Holy shit, how'd you do that?"

Jay, swooning bravely in pain, is not so much in pain that she neglects to punch her husband for such a callous remark. With her good hand, of course.

And then the two, Jay clutching her throbbing finger, and Jason, clutching his throbbing jaw, watch a surprising amount of bloodied water swirl down the bathtub drain.

Out of the shower, Jay is unable to dry herself, and Jason takes certain liberties despite the urgency of the situation. Both are secretly glad that blood is pooling on their ugly, ugly bathroom mat. Both are glad it can finally be guiltlessly thrown out.

"What do you want to do?" asks Jason, who immediately feels like an oaf for asking such a thing.

"Get back in the shower" says Jay, without any irony. Suddenly, Jason feels like less of an oaf.

"Back in the shower? But your finger!" thunders Jason, believing himself to be the voice of reason, but also believing that little things like reason rarely get in Jamie's way.

"Well, I still have shampoo in my hair, and I've only shaved one leg!" Jay shouts, appalled.

"But it nearly killed you the first time around!" shouts Jason, appalleder.

But of course they get back into the shower anyway, because Jamie wills it so, and Jason gently rinses the shampoo from her hair while Jay courageously struggles to keep her bloody stump raised above her heart to stem the bloodflow. In truth, the bleeding is not quite so bad at that, but also in truth, Jay is a bit of a dramaqueen.

Out of the shower once again, Jay displays her famous love of hospitals by refusing to go to one.

"Maybe it's not so bad" she mumbles, inspecting the damage. The fingertip is intact. However, the razor somehow managed to slit a hole through her fingernail and slice into the flesh underneath.

Lady Gillette, oh how I despise thee. How can anything so sweet, so pink, so plastic, shed so much blood? Pink plastic is the stuff of Barbie Dream Corvette and lawn flamingos. Pink plastic should not aim to maim. Why hast thee forsaken me?

Before Jay can put up a respectable fight, Jason dials the telehealth phone line, and speaks to nurse Brian. Nurse Brian will tell them if a trip to the hospital is necessary or not.

Jay, weak from loss of blood (or, maybe, just maybe, weak from the earlier consumption of 5 and a half martinis), can only hear snippets from the conversation:

"No, I don't know how she managed to shave through her fingernail. It was a disposable for crying out loud!"

"Yeah, that's her. I'm sure her file is quite thick. She bleeds a lot."

Jamie is so outraged that Jason and Nurse Brian seem to be more concerned with the razor's well being than her own that she nearly faints...or well, passes out. Whichever.

At the hospital, Jay is fairly certain that all the doctors are smirking at her. She is fairly certain that the doctor is writing incriminating statements about her in her permanent medical record, but when she inquires, the information is firmly denied her. In a parade of gauze and iodine, Jay marches up and down the halls shouting "Attica! Attica!" and no one really knows why. Jason, however, is content to sit back and enjoy the view afforded by the paper-thin gown that doesn't tie up in the back.

Jason is able to transport her back home, sedated. Her finger is mercifully unrecognizable underneath the copious amounts of sterile bandage. Any talk of her former finger nail, "lacerated nailbeds", stitches, or pink safety razors, send her spiraling into a woozy tailspin.

Lady Gillette is so heartless she doesn't even have the decency to appear contrite. Premeditated, you ask? Yes, we ask ourselves that too. Either way, Jay has resolved to go "au naturel" until safety razors actually become safe. 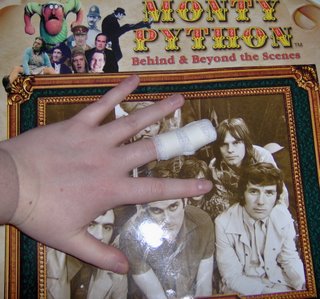 This finger is not the finger it once was. It may be months before the damage is repaired. Despite the fact that Jay was forced into a tetanus shot, Jason prays that lockjaw will settle in anyway, because without it, he's in for an awful lot of complaining. 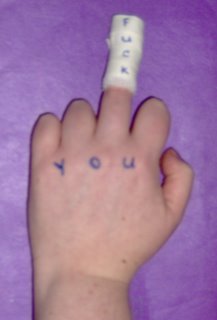 Temporary at best. It still doesn't properly convey my malicious intent, and will do an even poorer job of it should lockjaw set it and deprive me of my beloved obscenities.


But as you can see, I am determined to get through this with the grace and dignity you've become accustomed to here at Kill the Goat. Now go, and leave me to my pain and grief. Do not feed guilty about enjoying your weekends as I spend mine bedridden and practically delirious from the two children's Tylenol I'll take before bed. Just try to think of me fondly, remember me whole-fingered as in better days, and above all...beware the lurking lump of plastic in your showers. It's not as innocent as it looks.
Posted by Jay at 4:32 am