72 whole hours of turkey-filled club-hopping at the end of which my belly was bloated, the underside of my eyelids felt gritty, and Jason got even older than he already was. Whew.

Normally, I think receiving flowers at work is one of the best parts of a birthday. Jason doesn't really get off on that stuff though. He prefers lavish gifts of the edible kind. So he smacked my bottom and put me to work in the kitchen baking him a birthday cake that any (2)6 year old birthday boy would squeal with delight over. 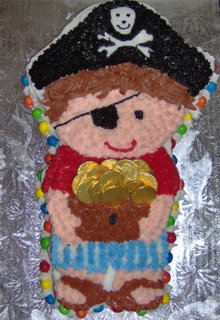 He loved it. He wasn't even embarrassed that I sent him birthday hats to match.

For his real actual birthday though, I made him the birthday dessert of his choice, which ended up being margarita cheesecake, which I think he chose because I don't eat cheesecake, so the more for him. Which is okay, because it's his birthday. And it's kinder to my hips.

All in all, I'd say we had a very festive 3 days, 3 days that we hope to be recovered from sometime before I attempt to turn 26.

Email ThisBlogThis!Share to TwitterShare to FacebookShare to Pinterest
Labels: Yummy