A story given to me by my youngest sister, who was aged 6 years at the time:

There was wons
a Teddy named
Zeddy his momy
was named Betty
his brother was
named Billy. and
his sister was
named Kitty. and
his dady was named
Jimmy. and his
dog was named
Timmy.
The End.


And another one from my next-youngest sister, who was 7 at the time. A picture for me on one side: 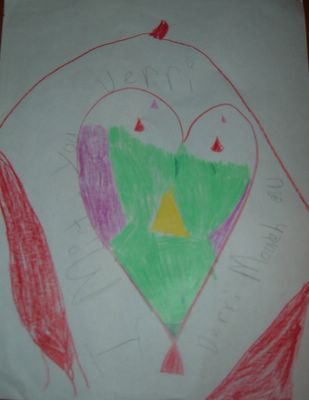 (it says: I Mist you verri verri mouch)

And the message on the back:

I Mist you verri verri much irs a stori.
1s ther as 4r sisters 1 girl that name is Jamie went to toronto for a wecend and I Mist wer verri verri Much and wen Jamie cam home I hose glade.


When I'm having a bad day, these are the things that make me go "aw". Now they're both grown adults and can write fluent English (in their defense, we were educated in the French language, so the fact that they can write in English at all was a testament to their high intellects), but I like to look back on the days when they were cute instead of hot, still shorter than me, and still wrote stories in crayon instead of sending me sporadic too-short emails.

Life is short, enjoy the sweet stuff.
Posted by Jay at 2:51 pm

Email ThisBlogThis!Share to TwitterShare to FacebookShare to Pinterest
Labels: Life is Good, When I was Young(er)