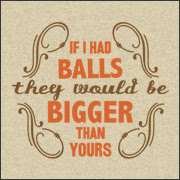 About 45 minutes into our date, he pretty much had me figured out.

As he pleaded with me to have even one chicken wing, so as not to let them go to waste, he then pointed at my accidentally third rye and coke (to his half a Guinness) and mumbled something about it certainly not going to waste. And it didn't. I gave each and every one of them a good home, and still got off my bar stool in a practically-lady-like fashion (thank you jesus, I wasn't wearing a skirt).

About three hours, 2 drinks, and 1 joint later, we were lying in bed when I had my aha moment. I was being a little....handsy...when I made an unexpected discovery, prompting him into a quick confession.
Oh, by the way, he says. I only have one testicle.

He only has one testicle!

I mean, his testicles still outnumber my testicles, but by a much slimmer margin than I am accustomed to.

And mustn't it be lonely in there, swinging away all day without a twin? Does it throw him off balance? And how can I tactfully ask these questions? It's not exactly typical first-date fodder: where did you go to school? do you like your job? are your brothers hot? what happened to your other ball?

So, I'm trying to find something to say to that. Something one-testicle-positive. Something to put him at ease. Something to break the weird shroud of silence that fell immediately after the one-nut discovery. I mean, should I confess some medical mystery of my own? But somehow the scar that I acquired from a bad double-dutch-skipping accident pales in comparison to a testicle that's mia. How am I to compete with that?

Luckily, I managed to nonverbally communicate the fact that, oh! one ball! neat! doesn't bother me at all! see what we can still do! and from this angle! oh, that tickles! And by the time I got through nonverbally showing him how cool I think his one ball is, I was thinking to myself, I'd like to do that again.

Because there's a problem.

He has a horrid first name.

Stop the presses! For the record, I DID know his name before all of this, thankyouverymuch. I just didn't realize it was going to be such a problem until I was saying the name out loud, over and over, kind of insistently, while being slapped in strange places by one hairy ball (what? who says you didn't need to know that?).

Why couldn't he be a Leonard, or a Wilbur, or a Harold, or a Thumbelina, if it came to that?

Why on earth did he have to be another Jason?

Because it's already getting a little messy. Anything I say, I have to qualify with New-Jason and Old-Jason, or Sane-Jason and Crazy-Jason, or The One I Don't Hate Yet (just kidding) (mostly). So I was thinking you might help me come up with a nickname for (New) Jason, one that does not contain the phrase "The One Nut Wonder", preferably.

Email ThisBlogThis!Share to TwitterShare to FacebookShare to Pinterest
Labels: Perversity