So first you gotta get your ass to the Home Depot and buy the biggest, most ridiculous, most overtly-won't-fit-through-your-doorway-no-matter-how-hard-you-ram-it tree you can find (and no, that was not a euphemism). 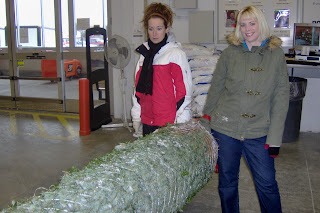 Then you strap it to the car using nothing but odds and ends of free twine and some misplaced optimism, and hope for the best.

Then you stop every 3km and reattach until you get home (because yes, an 80 foot tree does go careening off the roof of your stupid slippery car every time you hit the gas, or the break, or sneeze), losing limbs (tree limbs, not human limbs....well, not ideally) and needles along the way.


Then you get home, curse the fact that you brought home a tree that's twice the size of your house, spend the next 7 hours sawing it down to the point where it no longer looks like something Paul Bunyan would have brought home, then make a quick trip to the ER to get some stitches and a tetanus shot because that slicing yourself with a rusty handsaw is a Christmas tradition, goddammit.

Then you get into the rum balls. And I mean, you fucking lay into the rum balls like there's no tomorrow. Because first of all, now that the tree is in the house, it's making strange noises like maybe, just maybe, there's a rabid squirrel (or two) in there, and also because now is the time where you have to decorate it using a mishmash of "sentimental" (also known as "tacky") ornaments that the family has been collecting since polyester and aquanet were considered to be in taste. 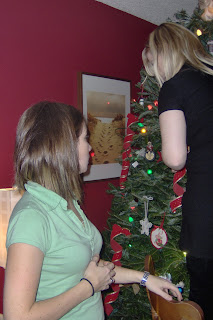 Then you try not to cringe as you dig out some gems such as: a styrofoam ball spray painted cold and "decorated" with toothpicks, several A&W RootBears, some threadbare Bugs Bunny balls, circa 1979, something shiny and distinctly phallic, and let's not forget this little gem, a piece of construction paper older than Hillary Duff, lovingly hand-crafted (using crayons and glitter, liberally, by the looks of it) by yours truly, when I was 18. Or so. 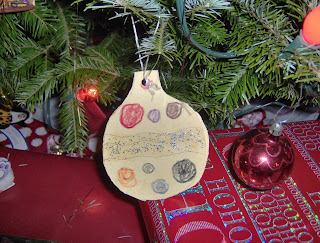 Then make a totally out of the blue phone call to make sure your insurance policy is up to date, and includes fire, and all that good stuff. Because that blinky, somewhat faulty, somewhat monstrously hot bulb is dangerously close to that brittle, dried out piece of kindling - er, ornament, I mean.

Then check the batteries in the smoke detectors just to be safe.

Then hang the stockings with care. Or you know, alternatively, hang them haphazardly on the stair banister when a mantel is lacking; that'll do too. Then take a moment to consider how fucking old you must be when your stocking is starting to grow mould. Mould! Right on Frosty's ball. 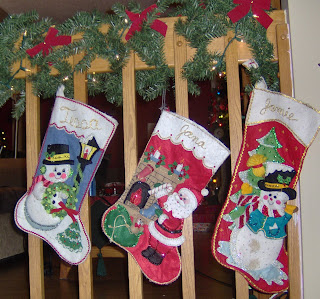 Then drink to console yourself. Eggnog is nasty, but brandy is dandy. If you drink enough, you'll forget that you're allergic to tree sap and cranberries make you gag and grandma still wants to know why you aren't pregnant yet. In fact, if you drink enough, your cheeks will turn rosy and your giggle will be enough to convince others that you're "in the spirit" when really you've just been "into the spirits." And if you drink even more, you'll find a naughty button around and instead of thinking oh, how inappropriate, you think, I'm drinking for free tonight! 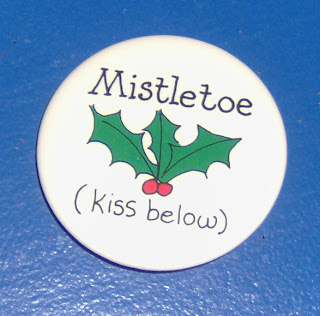 Then find a karaoke bar where the people are unironically wearing santa hats and the bartender is unabashedly pouring hot toddies and let the good times roll. And by "good times roll", I of course mean get ogled by anything with a penis, and make eye contact with no one, not even the chicks, and get very prompt service at the bar. 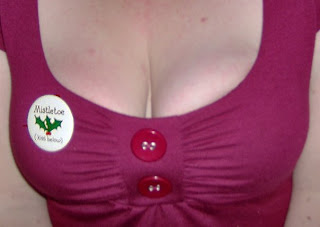 Then continue to celebrate in a similar fashion for several nights in a row. Don't be afraid to occasionally overdose on cashews, pop the cork on half a case of champagne, very occasionally lick a candy cane in a suggestive manner, sing "alternative" lyrics to the Christmas carols you hate the most, indulge in a snowball fight (Mexican fighting rules apply), raise the heat and lose the clothes, and only extremely occasionally mind you, don some footie pajamas and curl up on the couch with someone to watch cheesy Tim Allen movies that secretly make you cry.
Merry Christmas.
Posted by Jay at 9:33 am

Email ThisBlogThis!Share to TwitterShare to FacebookShare to Pinterest
Labels: Holidays