You Live, You Learn, You Eat the Worm. 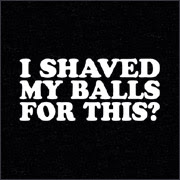 1. You know it's Christmas when the dog starts to poop tinsel.

3. I hate ordering wine at a "family" restaurant because for some perverse reason, they still go through the tasting ritual. I mean, if I just ordered a $30 bottle of wine from Chili's, I'm probably not too fussy. And if you're wearing suspenders filled with "flair", you're probably not a sommelier yourself. And the truth is, I find the whole thing so embarrassing that even if it did taste like gym socks, I'd probably just nod anyway.

4. I just bought a box of condoms that had a prize in it, the way cereal boxes do. But why are condoms trying to lure in customers this way? I mean, I thought that's what short skirts were for. Sex is not prize enough these days, you want sex AND a unicorn-shaped eraser? Jebus.

5. I learned to Wii on Friday. I'm considering getting addicted. I have wii-elbow from the tennis and wii-wrist from the bowling, and wii-crotch from the...well, it's just amazing the games they come up with for this thing, isn't it?

6. Excellent thing to do if you're ever bored: drizzle your dog with chocolate. I did this (accidentally) and hilarity ensued for hours - poor guy tried to lick behind his own shoulder blades for hours.

7. Talking virginity with your grandmother is funny. Listening to her refer to it as "the sex" over and over - priceless.

8. I love how every time I get into the bath lately, all the pine needles stuck to the bottom of my feet float around in the water until eventually getting stuck to other parts of my body, parts where no pine needles ever should be. I also love the delicious irony of soaking in the tub while reading The Dirt on Clean. I haughtily congratulate myself on living in a time when hot water magically comes out of the tap marked H, and feel superior that I use toilet paper instead of arsewisps. This is the book I shall buy in bulk and give as Christmas gifts. I like gifts that say "Hey, look at me, I'm intellectual AND hygenic AND have somewhat curious taste in Non-Fiction. Happy Birthday, Jesus!"

Email ThisBlogThis!Share to TwitterShare to FacebookShare to Pinterest
Labels: Randomocity