Did you read Half the Sky?
If you haven't, you should.
If you have, I bet you still remember every single word.
It's one of those books that stays with you.
It's been several years since I read it and I remain deeply moved and impacted by it.
Today I am watching the documentary feature that is just as horrifying and inspiring and awful yet necessary to watch.
You don't watch a rape centre in Sierra Leone deal with literally thousands of victims, over half of whom are between the ages of 12-17, and a quarter of whom are under 12 - the youngest just two and a half months, and not come away a slightly different person. Less than 1% of these cases result in charges\convictions, in part because on the law books, you can only rape a woman - rape does not legally exist for those under 14, even though it happens every single day, and 90% of young rape victims wind up with sexually transmitted infections. Rape is a shame on the victim, not the perpetrator. Your heart will be broken. You will be filled with rage
And that's just the unit in Sierra Leone.
Wait until you meet the courageous women of Cambodia, the girls who are bought and sold as children, trafficked into brothels, held as sex slaves until they are no longer useful. When you see a little girl have her eye gouged out by a brothel owner but forced to continue seeing clients while still bleeding (and they're so drunk they don't care) and then recount barely surviving an abortion yet still have forgiveness in her heart...it's not even comprehensible. These girls, even rescued from the brothels, are still rejected by their families for being "bad". It is often their families who sold them in the first place.
And it goes on.
The aim of the book and of this film is to highlight the oppression of women right now, embarrassingly in the 21st century, to show the violence and discrimination that is gender-based, directed expressly toward women because they are women. There are victims here, but there are also heroes. 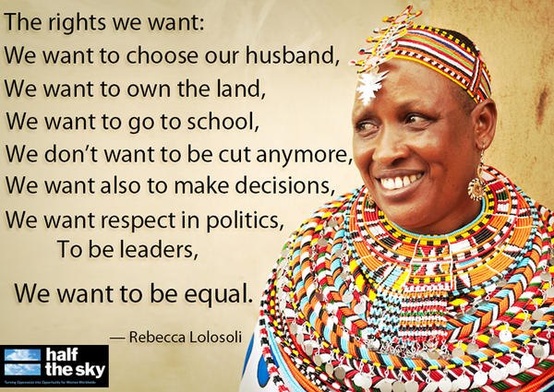 It is sad to think that most African countries after achieving independence from european colonial rule degenerated to their present 'Mob rule' status of rape pillage and burn. Sadly control and good leadership and humanitarianism and education have suffered too. I am at an age able to recall the differences.
My first visit to Freetown Sierra Leone in 1946, I recall a scene of serenity, nothing untoward, was shocked by the presence of 'Topless ladies' and swimming from Lumley beach. Also recall a ritual of the Bawani Devil?. but those were days when people were contented with their lot.
At the time I was serving on HMS King George V, A battleship(refuelling) returning belatedly to U/K, 1946 from the PAC War. Memories.

Glad to see your return.