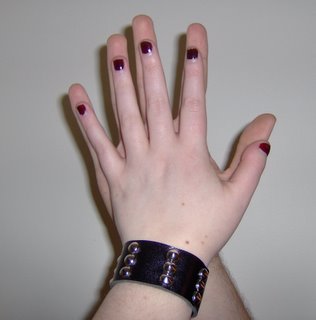 He presses our hands together often, though the results are always the same. His hands are bigger than mine. This we know. He laughs about it every time.

I remember when I was small, my mother came home with a stack of papers in her brief case. All of her fellow educators had photocopied their hands, palm-down, and they had spent the week trying to guess each one's identity. My mother laid each black and white copy on the dining room table, making a tableau more beautiful than she could know; every hand similar and not similar at the same time, every hand the same basic shape and the same finger count, yet every hand made distinct by the whorls and lines that demark us as unique.

Each hand says this is me. With these hands, I live my life.

My young eyes quickly identified my mother's hand amid 20 or 30 others. There was no doubt: those were the hands that had fed me, bathed me, held me. I remembered those hands from when she coloured beside me at the kitchen table. Oh how I envied the beautiful way she stayed inside the lines, choosing the most sumptuous colours, richly shading in each of her drawings. I remember those hands from when she showed me how to bait your own hook, even while the worm still squirmed about. Those hands had cracked eggs for my pancakes, braided my hair until they were arthritic, warmed mine when they were cold. Those were my mother's hands.

I was right. First try. No doubt.

Each of my three sisters was just as successful.

My father, however, was not. He declared that the game was stupid, made 6 attempts and failed 6 times before stomping away in frustration. For 15 years those hands had worn the rings he'd given her, but he did not know them.


I am always astounded that moments after a tiny red blob of a human being comes hurtling out of a too-small canal, its little bald head still pointy from the adventure, the cooing adults around the bed are immediately able to pronounce that He looks just like his Daddy, or, He's got my eyes, or, She takes after her mother, thank god.

I have never seen it. I don't see it in other people, and I have never seen it in myself. Do I look like my parents? No one has ever told me that I do. In fact, I could never see that any of my sisters were actually related to our parents, or to each other. But as my youngest sister grew into a woman, I was taken aback at how often I felt I was looking at picture of my mother when she was first married. I began to search my mirror more earnestly for signs that I shared genes with the people who'd made me. I found none.

Well, that's not entirely true. I found one, no, two.

My thumbs are my father's thumbs.

They're short, they're squat, they look deformed. They look less out of place on his hands, his hands being man hands. On my hands, they look quite absurd. (Go ahead, I know you're dying to scroll up to that picture again, so you can point and laugh at the freak on display.)

I could wish that my hands had taken after my mothers', the way she rubbed my back as I sat sick and hunched over the toilet, the way they turned jump ropes so expertly and packed lunches so lovingly. But what I have inherited instead are my father's ugly thumbs. Any time I sit and think of all the things my father has given me over the years, I come up with this:

1. An unsightly red tablecloth that he won at a company Christmas party and didn't want.

The tablecloth is long gone; for a time, it lined the crate where my dog took her dumps.
Tablecloths are easy to dispose of, but genetics are a bitch. You can't return them, you can't regift them. They're gifts that keep on giving (at least until I have an unfortunate table saw accident). They are a souvenir from my father, and every time I play Grand Turismo and fail to make a turn, or play thumb wars and lose my lunch money, I curse him for this awful gift.


Palm to palm, our hands say I love you even when our lips do not. We hold hands while we sleep, together even in our dreams.
Posted by Jay at 1:58 pm

Email ThisBlogThis!Share to TwitterShare to FacebookShare to Pinterest
Labels: When I was Young(er)