It's Sunday morning and I'm standing in the driveway looking like an idiot, waiting for a taxi. Now if this taxi was taking me away to a land where mothers-in-law do not exist, great. But it didn't. It picked all 3 of us up and whisked us off to the mall where Jason spends 80% of his week and where he did not particularly feel like spending his holiday. But his mother insisted that we go see the store that he manages, and so we called a cab...

Oh wait, did I forget to mention that we almost died yesterday, and in exchange for saving our lives we shot our brakes to hell?

Yeah. I don't know how that slipped my mind. The thing about Toronto driving is this:

1. Everybody honks, mostly for no apparent reason.
2. Nobody stops for red lights. Ever. Except for Jason.

So yes, we had to bring our car to the shop, kiss it goodbye for a good 15 hours and pay out of pocket until our eyeballs bled and all because Jason has this crazy notion that cars are kind of pointless if you can't stop them.

I won't write about the lovely day spent at the Markville mall, or about how Jason worried that his Mom was trying to pick up men in the clearance section, or how Jason managed to wipe his ketchupy fingers all over my jeans.

I'll just skip to the really great part where we took the subway downtown to see the CN tower. Because the wind was cold, we took the skywalk which means we avoided the weather but ran smack dab into something much, much worse. The mullets were instantly overwhelming. I felt woozy. I have not seen so many specimens of white trash since moving to Toronto. And they just kept coming, unable to obey even the most basic principles of walking. They slobbered, they dumbly waved their pirate flags, and I could only assume the Stupid Convention had just let out, what with the vast amounts of female facial hair and acid washed jeans coming at me.

In a way, I was right, if you take Monster Truck Rally to mean the same thing as Stupid Convention, which I do. Ick.

But finally we made it to the CN tower where we stood in line to purchase tickets, stood in line to refuse to have our pictures taken with cheesy backgrounds, stood in line to go through security (you stand in this pod thingy had have tufts of air blown at you, apparently to see if you're concealing anything good underneath your clothes, called "people puffers" because they dislodge particles and then sniffs them for traces of explosives). Then, before standing in line some more, we chose to get further acquainted
with this moose.

This moose is dressed as a mounted police officer, but he holds no actual authority. This moose is left over from when the city of Toronto was completely peppered with them. For a while you couldn't go anywhere without having a moose for a stalker. Canadians just love their mooses. That one moose nose probably will be responsible for the next germ outbreak of epic proportions.

Then we stood in line again to get crammed into one of the glass elevators that shoot you up to the top of the building. The elevators travel at 22 km/hr to bring you to the top, so between trying not to imagine myself plummeting to the street below and nursing my popping ears, I really felt good about paying a lot of money to get puffed with air and then crowded into this death trap.

We went up to the skypod first, which is the world's tallest observation deck. 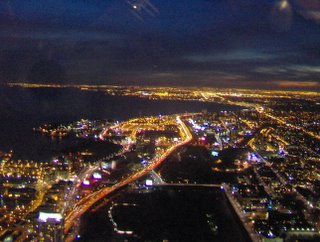 The CN tower is 553m tall (1815feet), which is really really high. Jason and his Mom stuck close to the wall, but I was leaning out over the glass for a better view, and to take really crappy blurry pictures that mostly look like smudges of blue.

I don't have a fear of heights. I do have a fear of falling from heights, but if I feel reasonably secure, then I'm good to go. The view was breathtaking. I really wanted to go at night because of all the twinkling lights, and I was not disappointed. 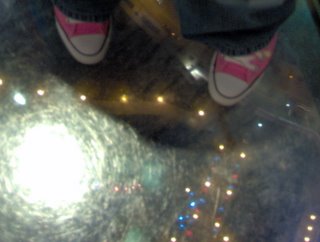 When the guide started blathering about how the tower gets struck by lightning 76 times a year, and can sway 6 feet each way in the wind, Nancy was ready to leave, so we descended to a lower level, where they have the glass floor (pictured here), and the outdoor observation deck. The glass floor is exactly what it sounds like, you can stand there and see the city wayyyyy down below between your feet. Lots of people won't stand on it; one lady cried. Kids for the most part are completely unafraid. The glass is only 2 1/2 inches thick, but a guide pointed out that 14 hippos could safely stand one on top of other - and I had to wonder why he looked right at me when he said that.

I mailed my grandmother a birthday card from the world's highest mailbox. I'm sure she won't even notice. And then we headed home, but not before I had a pee emergency and had to use a public washroom at Union Station.

Now, I sincerely hope that you have never had to find this out for yourself, but the bathrooms at train stations are grody places. I managed to find a stall that I felt I could pee in without contracting very many lethal diseases, and then spent 10 minutes trying to convince my reluctant bladder that it wasn't in any imminent mortal danger. I spent those 10 minutes being entertained by the writing on the wall.

And then, in the corner, a prayer of sorts: Please God I need $3 000 000 to move downtown in 2006. I wondered how long that had been up there, and whether it had been answered in the affirmative or not. I wondered what the prayer did not say - because certainly rental rates are inflated, but most of us don't have 3 million dollars in our pockets and somehow manage to live. But then I peed, and then I washed my hands very, very, very thoroughly, and we were on our way again.

Since we live in a very ethnic part of town, we figured that we had to show Nancy some of our neighbourhood's finest eats, so we ordered Chinese. It was the kung pao something or other that did me in - I tried to put out the fire with red wine. LOTS of red wine, forgetting that alcohol burns pretty damn well. Woops.

So yeah. I guess we ate. I have no idea what we may have done after that though. I woke up smelling like I bathed in the wine at some point, but the bathtub remained gleaming white, so I can't be sure what happened there.

All I can say for sure is that it's a damn good diversion from the plague of the M.I.L.