En route to the train station to pick up my mother-in-law, Jason takes my hand. Subways are notorious for romance, aren't they?

Jason: Oh sorry. My mistake. I thought you did.


Evidence of a long day: we're all looking haggard after just one drink. Jason has "forgotten" to shave for the 5th day in a row, and has "forgotten" to do anything with his hair once again. I wonder if his mother thinks this is the best I can do, and if she assumes that I let him walk around looking like an ogre when she's not in town. 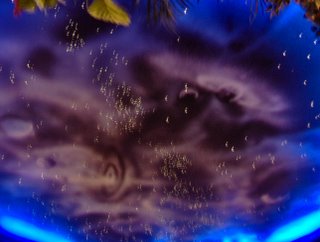 We go to the RainForest Cafe for drinks. Nancy and I demean ourselves by ordering Mount Daiquiris; Jason keeps his dignity with a Heineken. Famished, we tear into caribe chicken, barely noticing the rage of the elephants every time another thunderstorm hits. I wonder if the muzak we're "enjoying" is really indigenous to the rainforest, but Sam our waiter is rather humourless about the whole thing when I ask him.


I worry about the proximity of a rather large and sinister-looking parrot throughout the course of our drinks and munchies, but in the end, it's the hippopotamus that almost spells disaster. Luckily I am able to ward him off using only a wet-nap and the broken antenna of my cell phone, and the worst harm done is some wet bums.

On the thrilling drive home, Jason points out the sights: the gas station where we go for midnight slurpees, the place where we'll never go for Chinese food ever again, the place that sells bootleg DVDs for $4.99. Nancy is riveted, as well she should be. It's not just anyone who gets this tour.

At home, I serve up some Greek fare; I've even made my own hummus. However, it's the really heady cabernet sauvignon that does us in. Within half an hour, I learn that snoring is hereditary. Jason, who insists he's "fine" even though he weaves to the bathroom and back, passes out on the couch.

It's a good thing I love him....there are still 4 more days of this shit.

Email ThisBlogThis!Share to TwitterShare to FacebookShare to Pinterest
Labels: Life According to Jason