You know how I know you're gay? You like Coldplay.

Day Two (invasion of the mother-in-law).

What a lovely day - mild, spring-like, almost sunny but not. Plus, the car smelled like BBQ.

Cause, you know, Jason left sauce in the car until it eventually rolled under his gas pedal, where it then met an explody-type death. With his mom as a witness.

It's my fault really. Before she got here, I ran over the rules.

1. Offer her drinks constantly. Nothing worse than a parched mother, I always say.

2. Check your soap for stray pubes.

3. Pretend to be polite and helpful.

And then another 40 or so such rules, none of them mentioning anything about any stray sauce in the car. So fuck me.

Anyway, today we took the subway to visit Casa Loma. Not normally our kind of thing, but it seemed like a safe thing to bring your mother-in-law to...right? Just a castle in downtown Toronto, historical and stuff. 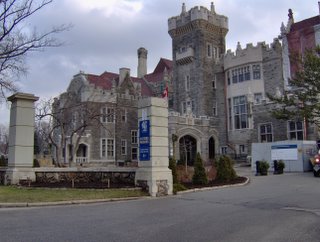 So we go in, and we meet Tom Cruise. I mean, the guy is obviously not Tom Cruise, but he claims to be, and it seems to allow this old man to fondle me overly much. He's really enthusiastic about telling us about all the movies that have filmed in this castle - Cocktail, of course, and Chicago, and The Tuxedo. I notice he neglects to include the great Vin-Diesel-as-a-nanny film, The Pacifier, in his list, though the pamphlets all tell us this is so.

Here's Jason standing in Sir Henry's state-of-the-art shower. Keep in mind, the "state" was 1911. When the guide told us about the great liver and bidet sprays, I had a hard time suppressing giggles. I mean, that's getting pretty intimate with your shower. And why does your liver need its own spray anyway? 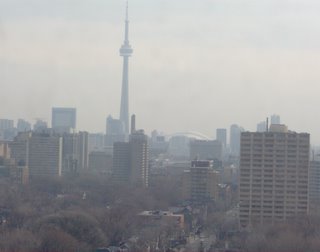 So then we decided to trudge up like 1200 stairs to the castle's towers. Now, we hadn't even had lunch yet, so what the hell was the point of that? I mean, this freakin stairs were barely the width of my hips, and they just kept spiraling up and up. I got so dizzy that for a while I was pretty sure I was dreaming. Finally, we reached the top. I snapped some pictures out the windows, which means I have a whole roll worth of bird shit on windows. It's great. You can barely make out the view! 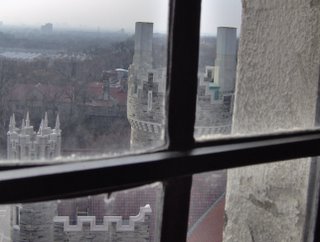 So then we realize that actually, we're not at the top. And we've come so far it seems silly to not make the last leg of the trek. Hah! Note to all others: abandon ship! It's the same view from a bit higher - so not worth it! I mean, we gave ourselves nosebleeds climbing to the apex of this thing.

And the damn view rewards us with this knowledge: we could have gone up that turret over there, the much shorter one, the one with the elevator.

We should have just got our losses right then. But we didn't.

Then we walked down a drippy, dark, dank 800-foot long tunnel to see "the stables", which I'm glad were labeled thusly because without hay or horses they kind of just look like old-timey cubicles. Then there was an area that I could only assume was used for playing skins vs shirts. I mean, what else could you use that space for? Certainly there was no guide to tell us, because guides don't make this 800-foot trek down an underground tunnel that seemed to be growing some kind of purpley fuzz on its walls.

This is Jason making his pouty face because we made him stand in the stall for the horse formerly known as Casa Loma Belle. He's pretending that he's not secretly flattered.

Seriously, those horse stalls were nicer than my childhood bedroom, and a lot more spacious. And dude - hardwood flooring!

This is Jason, Nancy, and me in the middle. Yeah, I know, I'm looking rather rusty these days, aren't I? And notice the spanish tile on the floor. Really notice. There were a kabillion signs telling us to notice said tiles. We felt guilty everytime we looked up.

So yeah, that was Casa Loma. From there we hopped back on a subway and headed to the ROM. This was ambitious of us, and by ambitious I mean stupid. Frankly, I was bushed. I woke up tired. Then I poked myself several times in the eye with my mascara wand before realizing that this was about to be a VERY painful day.

Don't get me wrong. I love the Royal Ontario Museum. Where else can you see dinosaur bones, pewter cod-pieces, and little kids screaming in horror at chinoiserie? Not many places, I tell you. And photo ops of your husband and a large golden camel? Those are pretty rare in life. Trust me.

And merciful heavens, this one didn't even spit! That was the only merciful part of the day. Nancy, wanting the "authentic" big-city experience, insisted on a street hot dog vendor lunch. Now, I'm not going to start listing all of the things that could be in those little condiment containers. I'm just saying that I am wary of anything that relies on the honour system. Plus, I always get relish on my shirts. Today was no exception. Damn you, relish. And damn the fat pigeons who gave us impatient looks during our quickie lunch. Not cool. 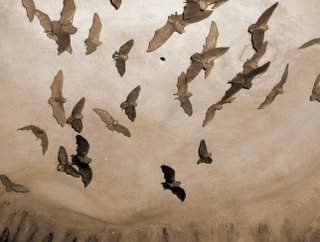 Then, ignoring the fact that bats are not my friends, Jason insisted I take a stroll into the bat cave with him. Now, here's a pointer for all you people about to open your own museums: when a girl just gets done ooohing over chintzy art deco furniture, she's not quite ready to jump head-first into the bat cave. I think a breather would have been beneficial for us all. Maybe the exhibit comparing 14th century Japanese armour to present-day hockey gear would have cleansed the palette a little. Know what I'm saying?

Back at home, I made my santa fe specialty, and just half a glass into a very scrumptious bottle of Wolf Blass's riesling I was GONE, and everything was going just peachy until we made a tactical error. We attempted to watch 40-year old Virgin with the MIL. Not a good idea, in retrospect, and incredibly painful for all of us during the longest 1h42min of our lives.

Anyhow, Jason wanted me to thank everyone who wrote words of encouragement regarding his resolution. He wants me to tell you that he is indeed reading rather diligently. Unfortunately, his mother came across his reading material and wondered who it belonged to. Of course he replied "Um...it's Jamie's."

These are the days of our lives.

I read over your blog, and i found it inquisitive, you may find My Blog interesting. So please Click Here To Read My Blog