Stuff We Could Have Done Without 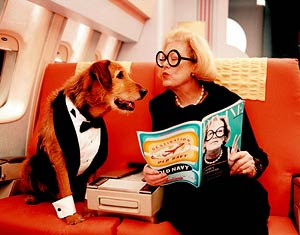 I have nothing against the store itself. I've shopped there, made purchases there, worn the damn clothes, BUT. But I hate those damn commercials. Their Christmas jingles made me want to slit some throats. Over the past few years, they have gone from just irritating to obscenely bizarre. Why should Morgan Freeman and a dumb dog make me want to shop at Old Navy? Apparently, they subscribe to the 'it's-so-painful-you'll-definitely-remember-it' theory. I don't appreciate it. They use cheesy graphics, perky music, and B-list celebrities (didn't The Nanny do one?), and frankly, they leave me feeling insulted that they have estimated their audience's IQ to be so bottom of the barrel. I'm not sure if they're deliberately trying (and failing miserably) to be kitschy, or if this is simply another case of marketing director on crack, but the end result has me groping desperately for the remote, and that can't be good for sales. And if I see just one more airhead enthusiastically peddling Bermuda Shorts!, I'll toss my cookies. And that's a promise.

What is there to say? Frosted two-tone hair, lavender mesh top, purple vinyl vest, man jewelry, and (snicker) sockless loafers! Yet mysteriously, this Ken doll failed to find a market. Little girls weren't buying, and Moms found him only mildly amusing. I applaud the effort. I'm all for these 'alternative lifestyle' dolls, if that's even what he was. Little girls had asked for a cooler Ken back in 1993, and this is what greeted them on the shelves of Barbieland just in time for Christmas. They did fly off the shelves eventually, thanks to an active interest taken by the gay community. Little girls, however, snubbed him completely (and who can blame them?)

Have you seen it? Hoo-eee, it's as good as it looks, let me tell you.
Yes, I have seen it. Someone took me to see it, actually. On a date.
There was no bootay that night, believe you me.
It's one of the worst films ever made. Sitting through it was one of the most painful experiences of my life. It was absurd, illogical, acted by bad wooden puppets who only somewhat resembled John Travolta, and was a colossal waste of time, energy, and money. The only good part of the movie was when the end credits mercifully rolled, and I missed that because I was busy planning my escape route.

"If it ain't broke, don't fix it." That's what my grandfather always said. He was a second generation Canadian, 5th generation farmer, and a man of no formal education, not even the first grade. But he still had better sense than the execs at Coca-Cola, because these guys had the best selling beverage of all-time, and they decided to change it! Today, New Coke is known as the biggest woops in thirst-quenching history. They took away what was distinctive and appealing to Coke drinkers, and effectively, made it more like Pepsi (which was winning taste tests left and right during the 80s). People likened this New Coke to 'furniture polish', 'sewer water', and worst of all, '2 day old Pepsi'. It took a mere 2 months for New Coke to bomb completely, and Coca-Cola had to bring back the old recipe, tails between their legs.

Pepsi has also had many transformations over the years: blue, edge, ONE, wild cherry, twist, crystal, max, vanilla, etc, etc, and for a brief time, there was Pepsi a.m. because the brilliant marketing people thought to themselves, 'Hey, you know what market we've been ignoring? The breakfast market!' Turns out, we don't really need Pepsi with our cereal.

I'll be the first to admit that the scent of gasoline leaves something to be desired, but also the first to question the necessity of 'nice' smelling gas. In fact, maybe there's a very good reason why gas smells so bad, for example, because it's noxious and dangerous, and sniffing it should be discouraged. Bad smell = warning. Well, leave it to the French to frown on stinky gas. Their product, 'Fruity Vanilla Super', was very lovely to smell, by all reports. But it never really took off. Apparently, people just aren't willing to pay extra for their gasoline to have enticing aromas, and since jokes about Frenchmen being fruity and/or smelly are just too easy, I'll leave off here.

These days, we just love foods that are "convenient&easy". We have go-gurt, yogurt for people on the go, because we all know how cumbersome yogurt used to be, right? But this product from Breakaway foods takes the cake- IncrEdibles are a push n' eat treat. They come in a tube, microwavable of course, then you push your stick through the entree, and voila, cheese and eggs. Breakfast for the busybody. It calls itself a 'portable comfort food'. I call it 'disgusting'. Anyone care to disagree?
Posted by Jay at 2:22 am

Email ThisBlogThis!Share to TwitterShare to FacebookShare to Pinterest
Labels: I think I'm funny