Saint Vodka of the Martini

By the time we woke up on Wednesday night (remember, our weekends are Wed-Fri, and it takes all of the 'real' weekend to recover from them), all of our good intentions were shot to hell. Everything was closed, no errands could be run (shucks), so what else is there to do but have friends over and drink, which is what we did. 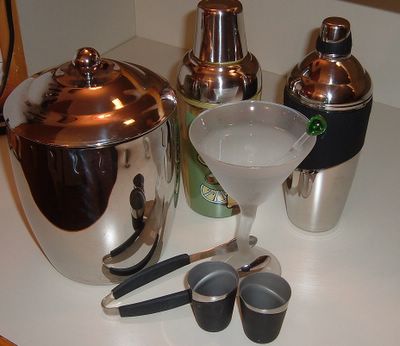 First, let me just say that if you're over 30, you'd better own and know how to use a martini set. A good one. And preferably, you should have a large collection of martini glasses on hand. Martini glasses are beautiful, and a must-have for any dedicated drinker. As you can tell from my url, I am a big fan of martinis. Just holding a martini makes you smarter and cooler, by at least 30%. If you don't like them, learn to love them. Trust me. My favourite martini recipes can be found here.

Martinis were in fact the drink of choice at our Wednesday night poker party. I made my fabulous philly cheese steak sandwiches, and my super-flaming-hot chicken wings, and nachos, of course. Everyone loves nachos. Not that anyone remembers consuming nachos, or playing poker, or even drawing breath after about 11:30pm. Personally, I'm just glad I didn't catch myself on fire on Wednesday night, considering that I must have been at least 180 proof and was in and out of the oven all night long.

Thursday is when things got really rowdy. We didn't even get up until 9pm, and there were still quite a few stragglers left over from the night before, consuming vast amounts of dairy product, and attempting to watch Donald Trump while not at all sober. Upon my awakening, I found a gleaming pile of silver with my name on it: all the nickels and dimes that I had won the night before. Apparently, I'd been the big winner. In a moment of brilliance, we decided to pile into the old Buick, and get rid of the change as much as possible (which is actually not easy to do in this town past 9pm). We ended up, most of us still in our pjs, at Walmart, and we sent Jason, the only clothed one among us, out to the Pepsi vending machine. For half an hour of gut-wrenching funniness, he poured nickels and dimes into that thing, and like some kind of strange cola-slot-machine, Diet Pepsis just came popping out.

On our way home, we decided to stop behind the hockey rink to play in the last remaining pile of snow. My housecoat kept me warm, but sadly, it felt picky in the elbow area again. It had been picky for the past week, but since I rarely wear it, I didn't think too much about it. We can't have everything, right? Definitely right. Somewhere in the giant pile of snow, I lost my ladybug slipper. Lefty. It was too dark to locate her, so she got left behind. Back in the car, on the way home once again, my friend Brian pulled a 2-inch sewing needle out of my elbow. Yup. That's what had been bugging me for the past week; apparently I had lost it last time I'd sewed. Woops. We were all disgusted for a matter of moments, until we saw something that stupefied and amazed us: a weenie wheelie!

Who knew that our little town had gotten hip to the hot dog cart? Not I. We were all quite proud. And, as Joey so eloquently put it the next night, "Drunks love their sausages." Is that dude quotable or what?

Well past 11pm when we get in, we irrationally decide that drinking seems like a viable option once again. And this time it's hardcore. 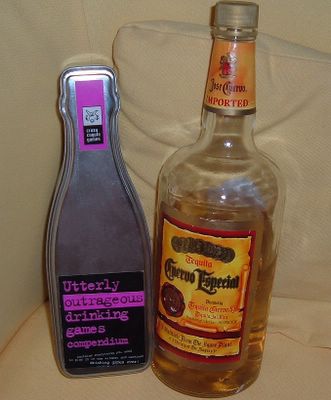 And one called Mutation ("if you don't know your ass from your elbow, this game is definitely for you!"). Like hell it is. Basically, each person points to a part of their body, say their head, and calls it something else, like "this is my leg." The next person does this also, and then repeats the previous person's, until you've got a great big string of ridiculousness. If you get one wrong, you take a shot. And basically, after the first 2 people, we were all doomed. Pretty soon, things were starting to look like the try-outs for Rent on the gayest Broadway ever.


Finally, when the sun came up, we went to sleep, piles of random bodies strewn in any fashion, lumped together for warmth, dreaming the dreams that only the truly inebriated can dream.

And then it was Friday. Ah, blessed Friday. Banking, groceries, bills, errands. Well, if I was a soccer Mom, that is. But I'm not.

Friday we kept things mellow, so I made margaritas. Margaritas are great. They're nutritional, they're green, they go down oh-so-easily. 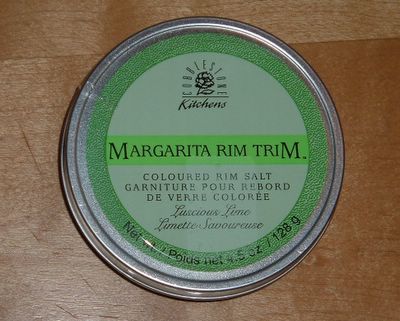 Doesn't rim trim sound like the dirtiest thing ever? Well, it does when you're drunk anyway. We had a nice, leisurely afternoon of margaritas, and said goodbye to our friends who were going back from where they came from: Toronto, Ottawa, Kingston. Kaitlyn and I sat in the driveway trying in vain to get suction under our arm pits. Not one farting noise could be made between us, although we made all kinds of other noises trying to procure them. Is this strictly a male art? Or maybe we were just too drunk and too cold to really concentrate. Plus, my elbow was still sore from the Big Poke I got the other day.

Friday night was quiet, because in essence, it's our Sunday night. It was just Jason and I, and his friend Joey. We had nickels and dimes of another kind, and spent the night staring blankly at the TV - did we watch Napoleon? Discuss crazy Polish drivers? Maybe it's just me, but I think Joey said his Grandma knew the Pope.

So at the respectable hour of 5am-ish, I tucked my little boy safely into bed, listened to him ramble for a minute about "ballpoints" before he passed out cold.
Posted by Jay at 8:00 am