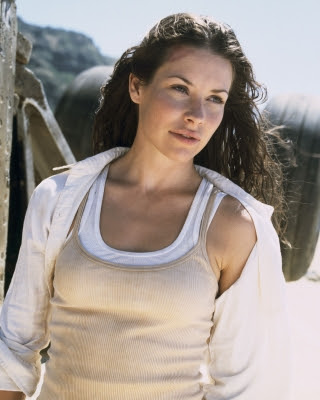 Okay, well, there's a lot about this actress, her role, and this show that really cheeses me off. A lot. But this week she gets the fucktwat award for the work she did before she landed the role of a lifetime on primetime. I'll give you a hint: it airs late at night, involves a 900 number, and includes the brilliant line 'It's not cheating if it's on the phone'.

That's right. This Canadian darling, apparently just moments before being cast on Lost, signed up to do a phone sex commercial, and it airs here all the time. All the time. It has forever ruined that show for me.

"Do you ever get lonely? I know I do. That's why I love to call Live Links. There are always lots of hot girls waiting to talk to friendly guys. Why don't you give me a call tonight?"

Yeah, I'm sure she just needed the money or whatever, but still. I'm sure her mother is real proud.

The thing about James Joyce is, I hate him. Why? Two words: Finnegan's Wake. I have never known a better reason to hate a man in my entire life. It took him 15 bloody years to write the thing, and it took me almost 3 months to read it, so that's at least 15 years and 3 months of wasted life that will never be restored. From what I've heard, I may be the only person to ever actually read the damn thing, thanks to its reputations for being 'incomprehensible, demented, and totally unreadable.' This reputation is not undeserved.

If James Joyce had had even one nice bone in his entire body, he would have burnt the manuscript and eaten the ashes, then jumped off a real high bridge, plunging into a frigid, shark-infested water where he would be devoured and digested forever more. His time, and mine, would have been better served working on a phone sex commercial. Fuck you, Mr. Joyce, fuck you right in the ear.

I think maybe it would be best to just stand back and admire the view: Stephan Jenkins is hot. HOT hot. This guy is like buttah. Can anyone suppress their urge to molest him? Yeah, me neither.

He's sexy as hell, has a degree in literature, drives a motorcycle, writes his own lyrics, and raises money for breast cancer in his free time. I think I lurrrrvvvv him. I'd definitely like to bed him. He plays guitar and drums, so we know he's good with his hands. Plus, I bet he's got a lovely sausage.
Posted by Jay at 8:50 am

Email ThisBlogThis!Share to TwitterShare to FacebookShare to Pinterest
Labels: Fuckfest